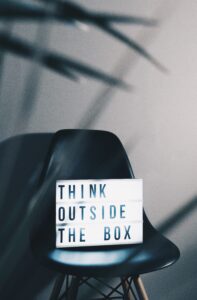 I am working with a client at the moment to help change culture to be more leadership and performance focused. One element of this cultural change is increasing the capability and a willingness to challenge the status quo. There is an old business saying along the lines of ‘if you’re not changing, you’re dying.’ In a world that is constantly changing our current bandwidth won’t be enough and we need to challenge the status quo and look for new ways of doing things in order to make progress.

In my experience organisations are good at identifying and adhering to risk within their environment whether that is be currency related, environmental, project delays or events that are unforeseen. I haven’t met as many that are as good at identifying the risk of staying within their comfort zone. By not disrupting and not challenging the status quo we risk not making progress, moving forward, innovating and breaking out of the pack beyond our competitors.

So what do we mean by challenging the status quo? It’s adopting a continuous improvement mindset and having a healthy scepticism of the current state of things. Honestly assessing where you are and comparing that to your aspirations as a team or organisation. Innovation and creativity don’t have to be transformational or big ideas. Innovations rarely get created full-blown. They are often the result of challenging the status quo, experimentation, trial and error and tinkering. Innovation and adapting to changes in the external environment rarely happen if we are unwilling to challenge the status quo.

In my workshops I often mention how the Beatles were willing to challenge the status quo.  The Beatles were incredibly successful in the early to mid 60’s. They produced hit after hit, performed in front of large crowds and were adored for their easy to sing music. Their performance on the Ed Sullivan show in February 1964 attracted 73 million people which was around 34% of the population. They appealed to all. In 1964 they had 12 songs in the Billboard top 100.

They were also a band that was willing to challenge the status quo. Here are some examples

One of the key ingredients of why the Beatles were able to challenge the status quo was their collective intelligence. Collective intelligence is tapping into the individual intelligence, thinking and experience of team members to make progress on something that is important to them. Each individual brings to the process a mindset that risk, experimentation and thinking outside the box is valued and encouraged. In the early days The Beatle, initially, were very much about John and Paul but George Harrison and their producer George Martin were significant influencers in their new sound.

So what are 4 things to think about when challenging the status quo?

One of the questions that I really like is “If Amazon (an organisation that is known as innovative and willing to challenge the status quo) was running your team/organisation, what would they do differently”