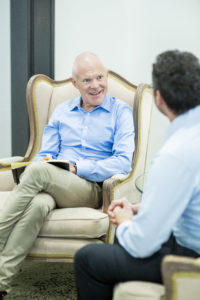 Many years ago when I was debriefing a high potential on their 360 feedback and the concept of micromanaging came up. The description from the participant above beautifully captured what micromanaging is. If your doing my job then you can’t be doing your job! In other words if you are playing in the weeds then what are you not doing that’s required from your role.

In today’s environment there are so many meetings we have to attend to, so much churn throughout the day, so much to chip away at and to just survive let alone thrive. Why do we often dive down and get involved in things we don’t have to? Is it about control? Is it about a lack of trust? Is it a fear of failure or is it simply over compensating for a lack of attention to other important parts of your role?

I have met leaders who skilfully avoid the important parts of their role such as coaching, planning, removing obstacles, managing performance and thinking longer term and over compensate by getting down in the weeds. A mindset along the lines of  “How can you criticise me for not doing that part of my job when I have been spending long days over here in the weeds” As I said, skilful avoidance!

The thing is that leaders aren’t paid to deep dive – Occasionally this might be important. An important project that is going off the rails may require you to dive deep but most of the time is to create the space for others to do their work whilst you do yours. Even when you deep dive there is a coaching and learning from experience component that forms part of your leadership role.

I am doing some transitional coaching with an executive at the moment who is overwhelmed with the amount of work he has experienced since promotion. This has also increased with the impact of Covid19. I could see he was spending too much time in the weeds.

How to create space?

I wanted him to get some time back in his diary. I couldn’t give him more time but I could help him create more time so he would feel less overwhelmed and use this time to focus on some on the strategic elements of his role.

I asked him to do 2 things.

I then asked Dave to prioritise the list by asking this key question:

“Which of these tasks, if delegated, will free up the most time to allow me to work on the managing and leading part of my job?”

The impact of these two activities has helped Dave enormously. It has allowed him the space and time to focus on his leadership role. He is less involved in the detail but more importantly he is having more one on one conversations with his team, spending time on longer term thinking and is riding his bike in twice a week to the office (prior to Lockdown 2.0 here in Victoria)

Micromanaging and being down in the weeds is unsustainable and it doesn’t build trust. It also means that you are not focusing on the true value of your role.

These simple techniques above can create the space and time for you to add value in your leadership role. The key is to not fill it up with more time in the weeds!